Caching is useful, because it saves resources by persisting local versions of values, that are in some sense expensive to produce from the original source. Expensive usually means that getting the value takes a relatively long time, which is often the case e.g. when fetching values from a HTTP API.

Since C# also has a Task-concept, and async-await syntax, for long lasting operations, caches and Task-objects seem to have a somewhat natural relationship.

For a simple cache, there is, of course, no need to reinvent the wheel as .NET provides e.g. System.Runtime.Caching.MemoryCache out of the box. MemoryCache is a very general cache-implementation that we will be using when we implement a special cache that can handle Task-objects.

A traditional solution for caching would be to cache the end results of the expensive operations, not the operation-objects (Task-object in this case) them selves.

Caching end results can have one problem. Namely, if more than one cache user needs a certain value at relatively same time, some cache users might end up generating the same expensive value simultaneously. Using cache was meant to prevent unnecessary expensive operations! All the (relatively concurrent) cache users will have to first run the expensive operation to get the end result, because the cache remains empty while someone already is generating the value. Then, when all the users of the cache have their own version of the value, they all try to add it to cache, but only the first value will be used and the others will be thrown away. So much expensive value generation done for nothing!

Saving non-completed Task-objects to cache displays to all the users of the cache, that generating a certain value has already begun, and thus there is no need to start to generate another one. Also, running the generation is cache’s responsibility in this cache implementation.

What if the Task-object fails?

Task could fail when e.g. a function that retrieves a value over HTTP fails to produce a value because of a network or server error. In practice, an exception is thrown. Caching failed values is called negative caching. Our TaskCache is not a negative cache in the sense, that it does not store tasks that are known to be in a failed state. TaskCache removes failed Tasks, but there is still the problem, that before the Task runs into a failed state, any number of cache users could have gotten it. There is no way of knowing if a Task will succeed, before it actually does. This means that users of the cache can receive failing tasks.

Any cache call site, of course, would in any case have to prepare to handle the failures in the value generation, even if there was no cache. Someone would have to generate the value, and no matter where this is done, there is the same risk of a failure.

At first, AddOrGetExisting might seem a weird function name. I mean, add or get, which is it? What that really means is: I want to get the value for this key. If you don’t happen to already have it, here’s a recipe how to make it, so that you can make it and then return it to me. So the function name should maybe be GetAndAlsoFirstGenerateAndAddItIfYouDontHaveIt. I chose to use AddOrGetExisting, because System.Runtime.Caching.MemoryCache uses same method name for similar purpose. Note, that this method in MemoryCache returns null, if there was not an existing value. On the other hand, AddOrGetExisting in our TaskCache always returns a value.

Using MemoryCache provides an out-of-the-box solution for storing objects and value eviction policy and functionality. MemoryCache can for example remove the oldest records from the cache when system memory starts to be used up to a certain level.

AsyncLazy is a convenience class for handling Task-objects with Lazy-class. For implementation, check out the complete code at GitHub or the original source.

AsyncLazy guarantees that the value generation is only run when actually needed, and not every time someone calls AddOrGetExisting.

Every decent implementation comes with a set of tests. These are implemented using NUnit framework. 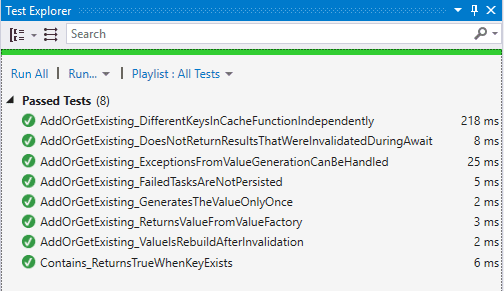 Tests ensure among other things that the value generation is only done when needed.

The complete code in a Visual Studio solution is available at my GitHub page.